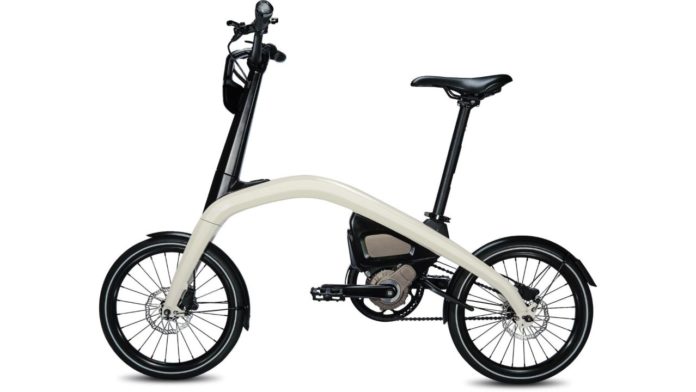 When General Motors announced, back in the fall, that it would begin manufacturing electronic bikes, no one was really sure what to think. E-bikes, which are bicycles that have a battery-powered “assist,” typically in the form of a hub motor, are wildly popular in Asia and have made a strong showing in some Western European countries, as well. The U.S. has yet to witness a big uptake of e-bikes, particularly in places where they would seem to fit: they’re illegal in New York City, and much of the rest of the country is having a hard time deciding whether they’re bicycles or motorized vehicles, and where they belong.

General Motors apparently believes that it can make a showing in the somewhat crowded global e-bike marketplace, so it’s on the cusp of introducing two new models under the brand name “Ariv” (pronounced like “arrive.”) First there will be the Meld, a compact e-bike, and then there’s the Merge, a folding e-bike. While the company is being a bit mysterious about specifics, it did say that the new e-bikes’ motors will allow for speeds up to 15.5 mph (25 kph) with four levels of pedal-assisted power. It takes approximately 3.5 hours to fully charge the motor, which will give you about 40 miles of travel.

The Ariv models will be launched in Germany, Belgium and the Netherlands – three countries that have fully embraced e-bikes, particularly for work commutes – and the Ariv Meld will set buyers back about $3,200. The folding Merge will carry a price tag of about $3,800. At these prices, GM is aiming for the higher end of the e-bike market.

The Verge’s Andrew J. Hawkins wrote that the introduction of the e-bikes is seen as GM’s attempt to future-proof its business against the expected declining popularity of cars.

“With electric-powered bikes and scooters lining the streets of most major cities across the globe, automakers are scrambling to capture a piece of the fast-growing micromobility sector,” he wrote. “And as vehicle sales continue to slide, they will need to find ways to appeal to a younger, more urban demographic with transportation needs that are much different from previous generations.”