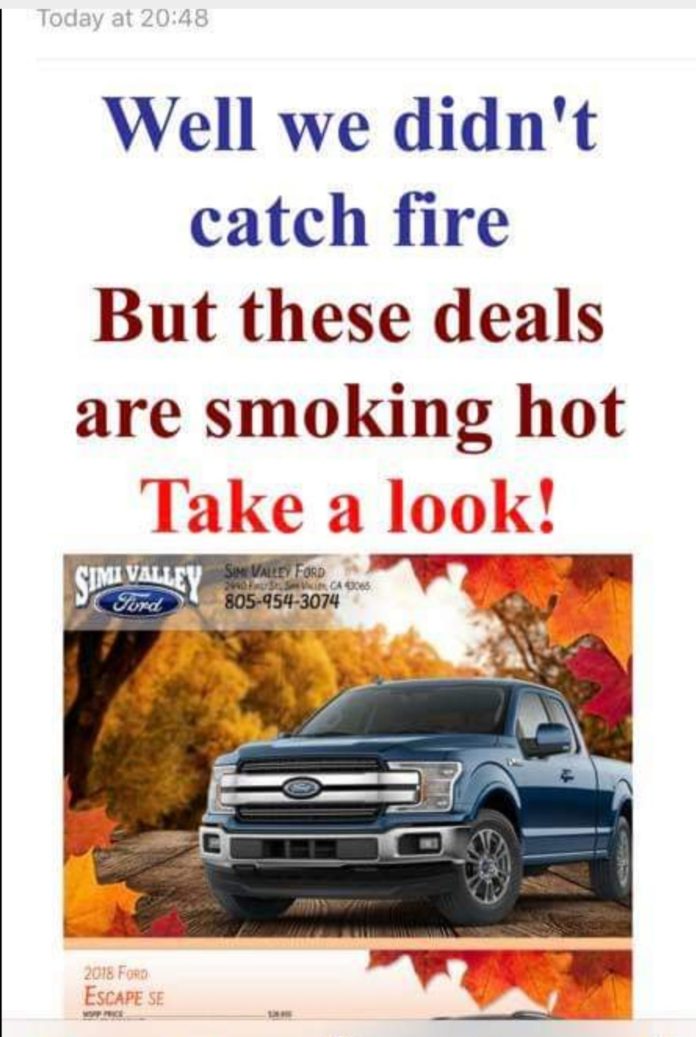 Here’s a lesson that a California car dealership is learning the hard way this week: when rescuers are still finding bodies from a natural disaster, don’t use that natural disaster as a theme for your marketing campaign.

“Well we didn’t catch fire, but these deals are smoking hot,” read an email marketing message sent by the Simi Valley Ford Dealership. Vehicles were shown on a background of colorful autumn leaves. The dealership is located not far from the Woolsey Fire in Ventura County which has so far burned 96,314 acres, destroyed more than 435 structures and killed two people. The fire has also directly affected several area car dealerships. As many as 250,000 people were evacuated at one point for the Woolsey Fire, which officials hope to have contained by Thursday of this week.

Social media was not kind to the car dealership’s marketing campaign. It was immediately labeled “distasteful,” “disgusting” and even “breathtakingly dumb.” The dealership responded by placing a halfhearted apology on its Facebook page, which was later deleted, presumably because of the weight of social media condemnation. Screen grabs of the advertisement remain, notably on Reddit. The apology read, “Hello Friends, Our advertising team picked a heading for this week’s campaign that appears to be insensitive to some.”

The apology may not have done enough to placate those angry about the tone-deaf message and the half-apology that implied the message was only “insensitive to some.” Other social media responses to the ad included:

“Simi Valley Ford, you are disgusting,” one user wrote.

Another asked: “Ford what the hell is this dealership doing? Almost makes me ashamed to own a Ford.”

“People are burning to death in their vehicles and this is what Simi Valley Ford thinks is good marketing” noted another.

To date, the series of wildfires in California, including the Woolsey Fire, have claimed at least 44 lives. The fires are being called California’s deadliest wildfire event in history.