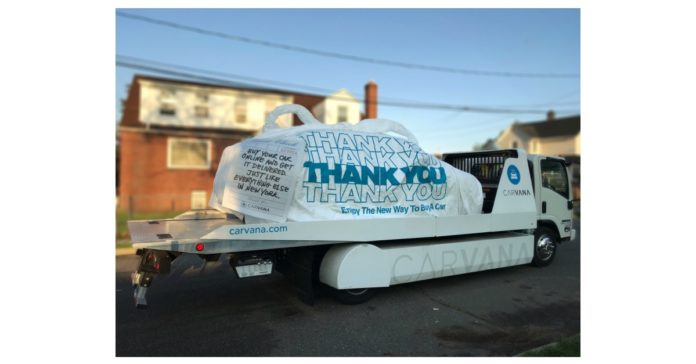 New Yorkers, who are used to odd sights, saw a new arrival recently in the form of cars wrapped in take-out containers. Carvana, the e-commerce car buying platform, chose a unique way to announce that it’s officially in all five boroughs now. The six-year-old company, which is based in Phoenix, Arizona, has made it official by rolling into Queens.

To announce the expansion, the company literally paraded its services through New York City with a caravan of five signature Carvana car haulers carrying vehicles. Three of the haulers featured vehicles that were “dressed up” in gigantic takeout delivery bags, emphasizing that consumers can order a car online and have it delivered to their doorstep (just like nearly everything else in New York City). The parade crossed the Manhattan Bridge from Brooklyn and tour through the city, passing signature areas like Soho, Columbus Circle, Midtown and Washington Square Park.

Queens residents can use the online marketplace to browse more than 10,000 vehicles online. They can also close the deal and buy, sell and finance their cars entirely online with no dealerships. The cars can be delivered to buyers’ doors the next day.

“That’s instead of spending four or five hours at a dealership,” Carvana co-founder Ryan Keeton said. “Now that we’re in the five boroughs, we thought it was time to launch our official rollout. We’re in 80 markets across the country but this is our biggest population by far.”

New York City now makes the largest market that Carvana does business in, and the company says it’s a good match for the service.

“New Yorkers are known for being mobile-first, so we’re proud to be the first to give them a fully start-to-finish mobile car buying experience; a service they’ve become accustomed to for much of their purchasing decisions,” said Carvana CEO Ernie Garcia.

All Carvana vehicles come with a seven-day, money-back guarantee, giving customers the chance to see how the vehicle fits their life. If they aren’t satisfied, they can return the vehicle within seven days for a full refund.