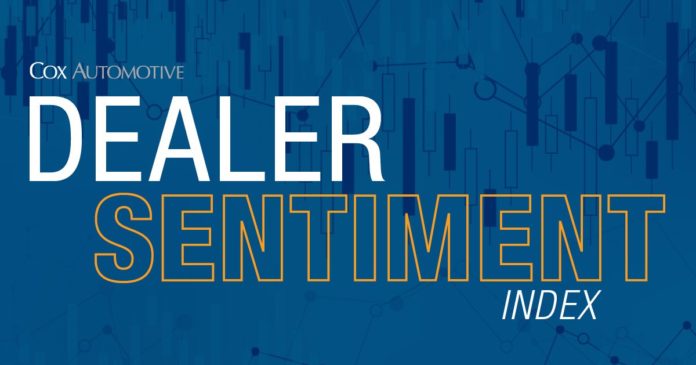 The second quarter 2019 Cox Automotive Dealer Sentiment Index (CADSI) released this week contains a mixed bag of information. Despite the slight upturn in the current market view – a rise of one point from the first quarter of the year – dealer sentiment remained largely unchanged from the beginning of the year. The CADSI, which is issued quarterly, measures dealer perceptions of current retail auto sales and sales expectations for the next three months as “strong,” “average” or “weak.” The survey also asks dealers to rate new car sales and used car sales separately using key drivers such as consumer traffic.

The small rise in current market view was driven by improvements in several elements of the index, including the customer traffic index, which is likely due to seasonality, and the profit index. In addition, the cost index dropped slightly. Despite the small rise in the market view, the current market index remained in the negative: slightly more dealers view the current market as weak compared to those who feel it’s strong. The biggest factor affecting negative sentiment – expressed by 40 percent of dealers – is current market conditions. Other factors keeping the index in negative territory included competition, limited inventory, and reduced availability of credit to buyers. Still, the news could be worse.

“The overall view of the market is remarkably stable this spring relative to the beginning of the year,” said Cox Automotive Chief Economist Jonathan Smoke, noting that moderating cost pressures, less concern with market conditions and interest rates, and fewer challenges from regulations are the key measurable differences relative to this time last year.

“It is encouraging to see that dealers remain optimistic,” Smoke added. “But their outlook has moderated substantially from the peak in optimism we saw last year as numerous negative factors continue to dampen future expectations. If market strength is being driven by used vehicles, can used-vehicle sales remain strong considering declining inventory? That’s a concern to watch in the coming months.”