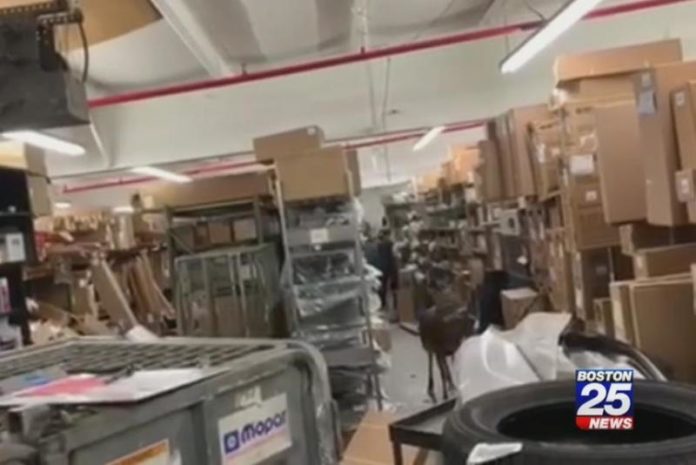 While earlier this week, we detailed a spate of crimes in car dealerships in New York, Connecticut and Florida, they were human crimes. This the end of the week brings news of a more antlered rampage through a Massachusetts dealership.

Security cameras in Central Jeep Chrysler Dodge RAM Fiat of Norwood, Mass caught footage of a neighbor running amok in the dealership. There was chaos and kicking, and some damage. But the perpetrator had antlers. Boston 25 News reported that video footage shows a large male deer leaping around inside the dealership, causing considerable damage (as a buck in a car dealership will do). Workers, drawn by noise from a back room, weren’t sure what to do.

“Out of my peripheral vision, I see what I think to be a deer,” said Cody Barba of the Central Jeep Chrysler Dodge RAM Fiat of Norwood.

Workers attempted to herd the deer out the door of a loading dock, which is presumably the same way it came in, uninvited.

“I ran down one aisle,” said dealership worker Dwayne Girard. “Chased it down there, came up another aisle. I went and told Peter and everyone, ‘Rudolph was here shopping,’ but no one believed me.”

In the process of the crime spree, the animal got its large antlers caught on many items, which – in addition to its prancing hooves – caused thousands of dollars’ worth of damage.  The chaos lasted for about 20 minutes, when a worker was finally able to chase the miscreant out the door, unharmed. Employees tried, but failed, to capture photos of the wildlife crime spree.

“People were trying to get a picture of it, and that was scaring it even more. Which drove it into the back, and we could hear it scraping around,” one employee said.