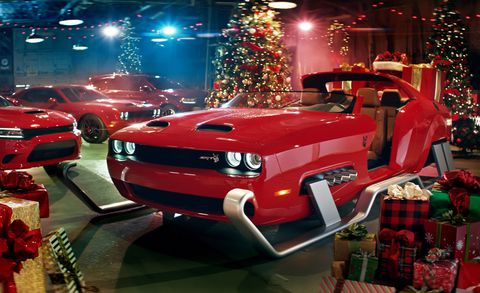 At the turn of the last century, citizens of the world marveled at the thought of horseless carriages. Now, in 2018, it’s time to marvel (at least for a few moments) to the concept of reindeerless Santa sleighs. Meet the 2018 Dodge Redeye Express, a sleigh based on the recently-released Redeye version of the Challenger. After all, if Santa’s going to go all around the world in a single night, it’s easier to do so with the help of 797 horsepower supercharged V8. (Although one wonders if it wouldn’t be too loud, waking the children dreaming of visions of sugarplums.)

The Dodge Redeye Express was, in fact, created for a Dodge Christmas campaign web series called “Jolly Fast Man.” The series is comprised of seven 30-second videos that bring viewers behind the scenes of the creation of the “muscle sleigh.” (It started when Santa was inspired to get in shape and supercharge his life.)

The videos were rolled out this month via Dodge’s Facebook, Instagram and Twitter pages and can also be seen on Dodge’s YouTube. They feature a rather buffer-than-usual version of Santa Clause (played by former NFL player and wrestler Bill Goldberg), presumably to communicate the idea of a “muscle car.” The first video depicts Santa musing that his “ride deserves an upgrade.” The episode “Gift Horses” addresses the idea of converting Santa’s sleigh from reindeer power to horsepower.

“We just dropped in the most powerful production V8 engine with 797 horsepower,” said Santa. “The hard part? Demoting the reindeer to the mailroom. They didn’t take it well.”

To convert the Dodge Challenger into the Redeye Express, Santa’s mechanic elves removed the 20-inch wheels and replaced them with sleigh runners. Next, most of the roof was removed, as well as two doors. The vehicle was widened by 3.5 inches, and a power bulge aluminum hood with heat extractors was added. Finally, the “elves” relocated the Challenger SRT Hellcat Redeye’s exhaust system from the back to the front-side area, according to Topspeed.