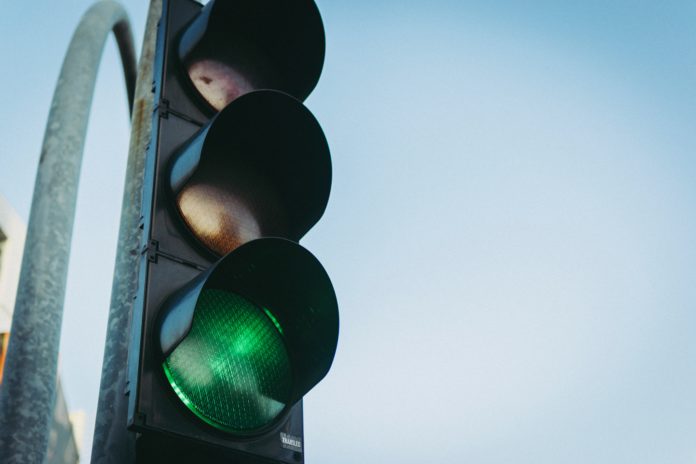 We’ve all had those days when it seems like every traffic light that we approach is red. We start to wonder if we have a face that makes stoplights change to red. At some point – after the 15th red light – we start to fantasize about having a remote control we can click at lights to turn them green.

While that doesn’t exist, some carmakers are making attempts to help us see more green. A new service available to Audi drivers, the Green Light Optimized Speed Advisory (GLOSA), aims to do just that. GLOSA uses traffic signal information and the current position of a vehicle to display a speed recommendation that, if observed, will allow drivers to pass traffic lights during a green interval to help reduce the number of stops at red lights. The communication happens via the vehicle’s 4G LTE data connection.

The new feature builds off a partnership Audi formed with Traffic Technology Services (TTS) that launched Traffic Light Information, an Audi connect PRIME feature that enables the car to communicate with the infrastructure in certain cities across the U.S. GLOSA is available in certain Audi models from 2017 and later. It costs $199 for six months; $499 for 18 months, and the first six months are free.

Whether the GLOSA feature works is dependent, of course, on whether the driver’s area communicates the necessary data regarding traffic systems. To date, the green light advisory feature is available in 13 cities at 4,700 intersections. (In other words, don’t count on it to help you navigate green lights in Dubuque.)

But does it work?

A recent review of the service by tech magazine Mashable found that it’s easy to use and often works under ideal circumstances. The reviewer who tested the feature, however, found that it doesn’t work in busier or denser areas, and that availability can be limited even within connected cities. (The reviewer tested it in Palo Alto and Walnut Creek, California.)

“Mostly the green advice didn’t do much for my drive,” wrote Mashable’s Sasha Lekach. “Since the recommended speed rarely came up, it wasn’t something I could depend on. And when it did pop up with its advice, I was already driving that speed or it was impossible to match because of other cars or the situation on the road.”

Ah, well. Back to fantasizing about a clickable button that turns lights green…at least for now.