This is the first in a five-part series of articles about the various ways in which DCG Capital can assist automotive dealerships. DCG Capital supports owners of automotive dealerships by assisting them in obtaining the most effective and attractive sources of financing for all financial transactions whether it be for the acquisition of additional dealerships, or by providing better terms and conditions for their existing financing. 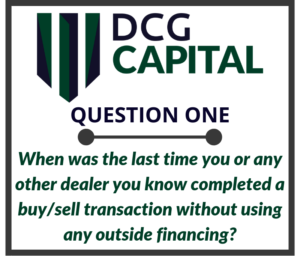 The answer is likely never.

Acting as the intermediary between large banking institutions and local dealership groups, DCG Capital aims to match borrowers with lenders to fund expansion.

“A bank in New York looking to lend to dealers can get on an airplane and fly out to 17,000 dealerships around the country or have one relationship that can connect that bank lender to dealerships nationwide,” noted Seawell.

Working in conjunction with DCG Acquisitions, DCG Capital leverages their dealership relationships with buyers, sellers and lending institutions with money to put to work.

“The current environment offers a successful and intelligent automobile dealer the opportunity to acquire the Goodwill, called Blue Sky, of a well-managed successful retail automobile dealership at a multiple of between three and nine times cash flow.”

The other assets required to be purchased, including new and used vehicle inventory, parts and accessories, furniture and fixtures, as well as real estate if owned are typically bought at their fair market value. Seawell estimates the resulting total cash-on-cash return to the purchaser could range from 5% to 15%, depending on the the multiple of cash flow of the purchase. 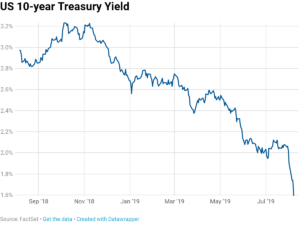 Therefore, that same dealer has the opportunity to take advantage of these low interest rates and use a prudent amount of borrowing leverage when buying a dealership. The benefit of this relatively inexpensive capital can result in a net cash-on-cash return for their purchase exceeding 25%, according to Seawell.

The all-in financing rate for a borrower, however, is derived by a percentage spread to the benchmark rate – a vigorish – based on the borrowers creditworthiness, primarily the strength of a dealership group’s balance sheet.