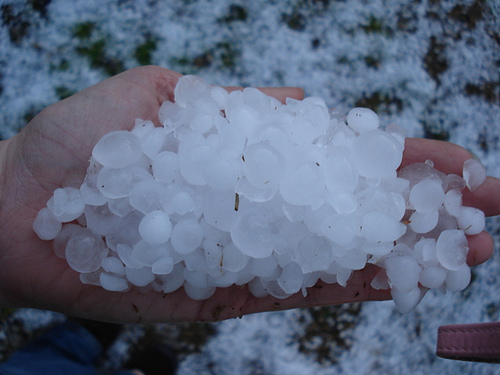 While most auto dealers have seen the costs of insurance rise precipitously in recent years, one group has seen their costs go up by as much as five-fold: dealers with lots in hail-prone parts of the country. In 2017, damage to thousands of vehicles in dealership lots across Texas, Nebraska, Oklahoma and other central U.S. states led to billions of dollars’ worth of damages that resulted in vehicles that had to be either discounted to be sold “as is,” or fixed, often to the tune of $2,500 per vehicle.

All told, U.S. insurers paid out $15.5 billion to cover claims related to severe storms that produced conditions such as hail and fierce winds during the first half of 2017, the second-costliest on record for such damage, according to Insurance Journal. Hail becomes an extra-expensive and time-consuming prospect when damage must be inspected by insurance companies. A company called Understory is hoping to change that.

Understory has begun offering a product called Auto – Hail Safe that it says has simple and cost-effective hail coverage to bridge the financial gap of long restocking timelines and cash flow to repair damaged inventory. At its core, the product uses weather radar to determine when hailstorms have hit a dealership.

“Traditional insurance quoting and adjusting takes too long with ever-increasing premiums and unmanageable deductibles,” according to the company’s web site.

Instead, dealers chose their policy by selecting payout limits and hail size options to customize the policy to their needs. When a hailstorm hits, Understory’s weather stations detect and understand the storm’s unique fingerprint. Once the data have confirmed a hailstorm over the dealership, the company says it has a 100 percent transparent policy trigger, without adjusters, waiting or hassle. Payout can happen within a week or two of the storm compared to the 12 weeks it could take for a typical hail damage payout. Coverage is discretionary and can cover economic damage to vehicles, roofs, property loss, revenue loss, advertising, and other expenses.

“It’s not like a typical loss, where you have adjusters come out and they have to assess damage,” David Ditgen, one of the brokers Understory has enlisted to sell Hail Safe to dealers, told Insurance Journal. “If the weather station says it happened, it happened, and they get their money in a matter of two weeks.”