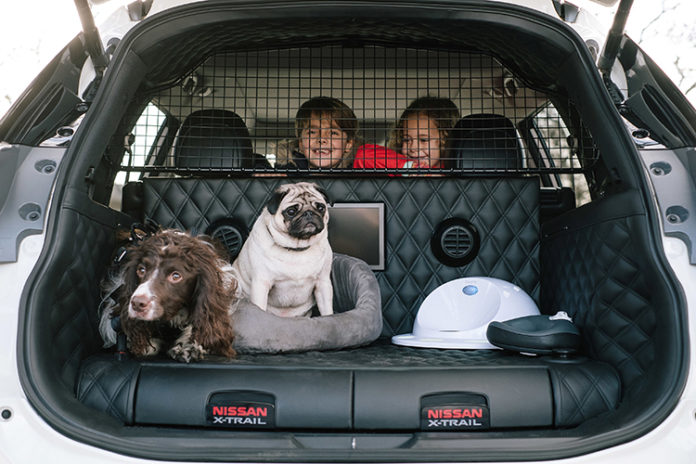 It’s not news that sales of smaller vehicles are going…well, small. We like our trucks, SUVs and crossovers, and the sales figures show it. But why? When gas prices might be low right now, interest rates aren’t, and American households are struggling with bills. So what sends us running to the larger vehicles? While there are a variety of reasons, one of them may be our furry household friends.

According to the American Pet Products Association, there are approximately 77 million pet dogs and 85 million pet cats in the U.S., and a growing number of their owners take them along when they travel. Airlines are eager to make more money than basic fares in any way they can, so the fees associated with flying with animals are a tempting source of cash. Whether it’s an “emotional support animal,” a trained service dog or just a pet, increasingly, it’s often in the main cabin with owners.

Younger Americans from the Millennial generation cherish their pets (“fur babies”) more than any other demographic group, splashing out money on everything from fashionable outfits to health supplements and even allergy-free organic foods, and even remodeling their homes to accommodate pets.

Increasingly, it means that pet owners are taking to American roads with Rex and Mister Whiskers. And since we value our pets more than ever today, it’s necessary to do a bit more than open the car door and let them hop in and sit where they wish. While it’s a romantic image that’s part of our popular culture – dog and a driver on the open road — it’s simply dangerous for pets of any size to travel unrestrained in vehicles, according to David Tayman, DVM, writing for the Baltimore Sun.

“Not only do loose pets distract drivers, but in case of a panic stop or accident, pets riding on a seat or human lap go flying and may be injured or killed,” wrote Tayman. “In addition, even a small unrestrained pet can become a hazardous projectile and cause serious injury to human passengers. For the same reasons we use car seats for kids and seat belts for adults, pets need safety restraints.”

The ASPCA recommends that all animals traveling in vehicles be secured in a properly sized and ventilated pet carrier. For those who can’t bear boxing up Fluffy for the car ride, there are an increasing number of safety systems, including harnesses, available for pets. (Before you put your pet in a harness, however, be sure it can live up to the manufacturers’ claims, since the market is unregulated. The Center for Pet Safety has tested some types of pet restraints and found them lacking, while others have done well in crash tests.)

So, it’s safe to say that with more Americans on the road with more pets, more pet-friendly vehicle features are required in the vehicles themselves. It has become a major selling point for pet-loving car buyers. Earlier this year, U.S. News & World Report published its 13 Best Cars for Dogs list, and had some tips for car buyers looking to take their pooches on the road.

“Dogs want cars that are easy to get into and out of, are comfortable, and give them a feeling of security,” according to the report. “They also need fresh air, protection from the sun, and proper temperature control. They need enough room to move, but not so much that they can be tossed about.”

Car manufacturers are beginning to offer pet-friendly features to attract buyers who like to travel with Rover. For some car models, it’s a selling feature. In a country where we spent approximately $72 billion on our pets last year alone, there’s no reason to expect that some of it won’t get splashed out for pet-friendly vehicle features, particularly in the U.S. The Google Auto Trends Report found that the average American was 36 times as likely to search for pet-related items such as dog car seats and dog hammocks than the average car owner in Germany, and 10 times more likely than the average car owner in Japan.

Some of the many pet-friendly features on offer today include multi-zone automatic temperature controls so warm/cool air can be targeted to pets, washable interiors to help cut down on mud, low floors to make it easy to place animal crates, seats that fold down fully, a 50-50 split in the rear seats so crates can be installed while still leaving room for a rear passenger, air suspension, seats that won’t attract too much animal hair and built-in window shades positioned to accommodate animals in crates or harnesses. There are even purpose- built conversation mirrors and camera systems that allow you to keep watch on your pet as you drive (see the 2018 Honda Odyssey’s CabinWatch system), as well as ventilation options (the 2018 Toyota 4Runner has a rear liftgate window that lets out “doggy smells.”)

The luxury brands are taking pet friendliness even further, for those who wish to travel with Checkers but not have their vehicles look as if they’ve been traveling with Checkers. The 2018 Land Rover Discovery features a flap that covers the top of the bumper, protecting it from damage by dogs’ claws scratching the finish when entering and exiting the vehicle.

With the pet travel aftermarket being worth as much as it is, car manufacturers and even dealers are searching for ways to channel more of that money from the aftermarket suppliers and into their own balance sheets. With younger, video-obsessed Americans, there is rising interest in particular for on-board cameras and those that record from more than just a single angle. Consumers seem to want everything inside and outside of their vehicles captured, according to the Google Auto Trends report.

“This creates an opportunity for camera and accessory marketers, but the auto industry should also be thinking about how to integrate new styles of on-board cameras directly into vehicle design,” said the report.

So what could possibly top the current trend for adding features to create pet-coddling vehicles? The purpose-built vehicle for pets. The Nissan X-Trail 4Dogs, which is still in the concept phase, features a built-in ramp, safety harnesses, a 360-degree dog wash and dry system, a spill-proof water bowl, a pet-paw activated feeding system, and pet cameras. Perhaps it’s only a matter of time until YouTube features a dedicated channel for pet vehicle videos: Bailey Hits the Road.