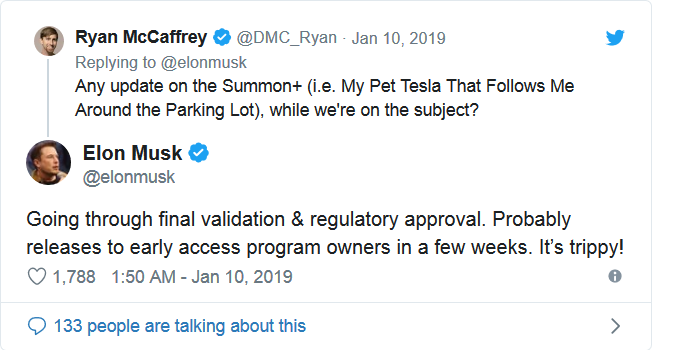 Everybody’s done it at some point. You’ve left your vehicle in a huge parking lot. You’ve shopped quite a bit. Hours later, you need to remember where your vehicle is located and find it, lugging a bunch of heavy parcels. What if you could simply summon your vehicle and have it come to you using automated driving mode? Even better, you’d get to play out your personal “Knight Rider” fantasies.

The idea isn’t too-fetched. Telsa’s Elon Musk has said that its Advanced Summon update is currently undergoing final validation and regulatory approval, which could mean that members of the company’s early access program could receive the new feature in a few weeks, according to the web site Teslerati. A tweet from Musk on January 10th seemed to confirm it: “Going through final validation & regulatory approval. Probably releases to early access program owners in a few weeks. It’s trippy!”

The feature, sometimes referred to as “My Pet Tesla,” won’t be available everyone, Musk noted, since the company was receiving some “regulatory pushback” from some quarters. In the meantime, Tesla isn’t the only company pursing the “my pet vehicle that follows me” feature.

Apple is reportedly filing patents for a technology that would allow iPhone users looking to rent a vehicle to use their phones to pay for and summon a suitable ride. In a patent application published in early February titled “System and method for vehicle authorization,” Apple describes one technology in which “the vehicle autonomously travels to a location associated with the second communication” after biometric authorization and payment. The patents are an element of Apple’s “Project Titan,” an initiative to develop self-driving vehicle systems.

One of the biggest challenges to self-parking vehicles or vehicles that can be summoned like pets remains laws and regulations. Congress is still working on autonomous vehicle guidelines (one landmark bill failed to pass late last year) and until those are available, state regulators make the rules. In most places, the rules still generally require a driver to remain behind the wheel whenever a vehicle is in motion.