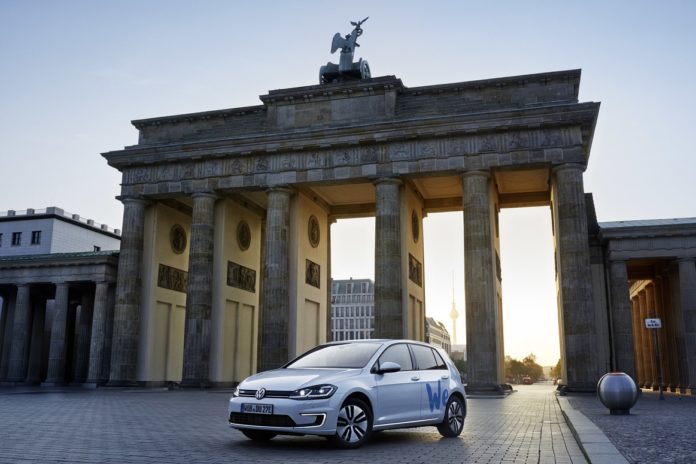 “It’s electric” may sound like a flashback to a dance floor in the 1980s, but it’s also emblazoned on the side of Volkswagen’s new all-electric ridesharing fleet. The German automaker recently launched WeShare, a service it hopes will compete with other services such as Car2Go, in the form of 1,500 e-Golfs roaming the streets of Berlin. Next year, the program will also feature 500 additional e-up! vehicles and an undisclosed number of Volkswagen ID.3s. WeShare is a free-floating system without rental stations – meaning they can be picked up and then dropped off anywhere — and is operated digitally via a smartphone or tablet app.

“Initially, the service area of WeShare will cover about 150 km2 – in the city center and beyond the city train ring line,” said Volkswagen in a news release. “Later, the area will be extended in line with the expansion of the fleet. Upon the launch of the system, customers can benefit from an attractive tariff of 19 cents [Euro] per minute. [€0.19 equals approximately $0.22]. The registration and airport fees will also be waived. From September onwards, tariffs in three categories are to be offered at an average price per minute of 29 cents.”

Car-sharing is advancing as a viable alternative to vehicle ownership in urban Germany. In 2010, only about 180,000 people were registered as car sharing users. Earlier this year, this number grew to 2.46 million.

The WeShare program will assume the responsibility for recharging the vehicles as needed using the public charging network available in Berlin, though in later iterations of the program, users will be offered incentives for recharging the vehicles themselves. Users of the service will need a smart phone and credit card, be at least 21 years old, and have had a driving license for at least one year registered at an address in Germany.

Volkswagen has said that it plans an expansion of WeShare, initially to Prague, together with KODA, and then to Hamburg, in 2020. WeShare joins several other app-based programs Volkswagen operates in Germany, including We Park, which helps users find parking; We Experience for personalized recommendations concerning goods or services near to a vehicle; and We Deliver, which helps users find a delivery point for parcel services.