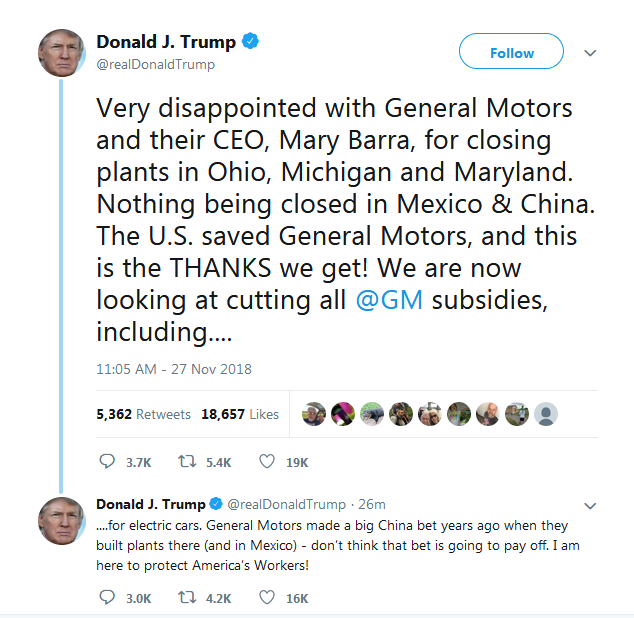 The spat between the Trump Administration and GM took a more dramatic turn recently, with the White House tweeting disapproval and threats to the car maker after the announcement that it would close five plants in Ohio, Michigan and Maryland and lay off approximately 14,000 people. The closures are a political embarrassment to Trump, who campaigned as an economic protection candidate, particularly in the rust belt. In a series of Tweets, the president threatened to pull GM’s “subsidies,” a message which has left many scratching their heads in confusion.

“Very disappointed with General Motors and their CEO, Mary Barra, for closing plants in Ohio, Michigan and Maryland,” Trump tweeted. “We are now looking at cutting all @GM subsidies, including for electric cars.”

A source told CNN Business that GM is “unaware of any significant federal subsidies the company is receiving beyond a $7,500 plug-in tax credit, which goes to the consumer, not the company.” The credit is available to buyers of plug-in electric vehicles, but this subsidy shrinks and disappears once the car manufacturer reaches a threshold of 200,000 units sold. GM is expected to hit that threshold by the end of this year thanks to its all-electric Volt model. Tesla has already hit that ceiling. If Trump wished to somehow cancel that credit – or the little time that remains for it – Congress would need to draft legislation that specifically singles out and punishes GM, which seems politically unlikely.

“The entire industry qualifies for this. It’s nothing exclusive to GM,” said Jeremy Acevedo, manager of industry analysis at Edmunds.

In addition, GM already has a significant relationship with the federal government to provide vehicles for various agencies, including the Secret Service, which drives modified Chevy Suburbans, and the modified Cadillac that transports the president.

The confusing exchange was enough to drop GM’s stock yesterday by as much as 3.8 percent at one point. (It closed 2.6 percent lower.) GM CEO Mary Barra has maintained that the plant closures are about preparing the company for the future of driverless and electric vehicles and eliminating from the GM lineup several models of sedans, which haven’t been great sellers in recent years as American buyers’ tastes shift to SUVs, trucks and crossovers.