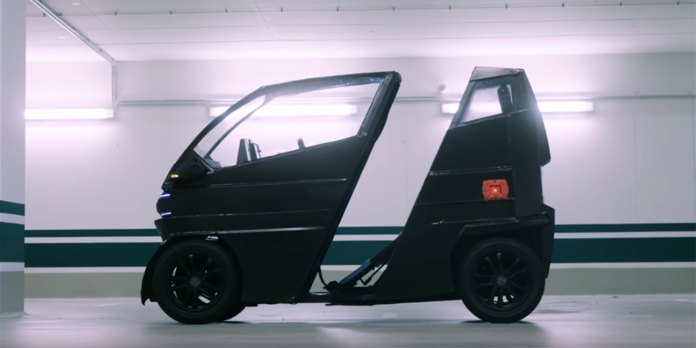 “We conducted a survey with friends, families, and strangers to see what was needed in an urban setting, what their vision of future transportation was and how we could make an idea closest to their imagination,” said a spokesperson for Germany’s Iev Immobilien Gmbh (IEV GmbH). The company’s new concept vehicle, the iEV X, is being presented as an “intelligent transportation system.” It’s not a quite a car, and not quite a motorbike, but something in between.

In short, it changes size and shape based on user needs, and can carry between one and three people. (Watch the YouTube video here.) It doesn’t go very fast, however, and it’s about five times smaller than a medium-sized car, weighing 115 kilograms (about 253 pounds) and measuring 31 inches wide by 63 inches long, and can expand to 75 inches long. A passenger (or two slim passengers) can climb into the jump seat behind the driver when the car is expanded. The jump seat is also the prime spot for cargo or groceries.

The iEV1 X is classified as an L6e-BPLight quadri-mobile for passenger transport under directive 168/2013 of the European Union. (In some cases, it could potentially use bike lanes rather than roadways.) It’s less clear regarding how street-legal it would be in the United States. One bonus in a large city: it’s small enough to potentially be brought into an elevator and an apartment.

iEV is currently pitching the zero-emissions, all-electric vehicle (it includes a solar panel for extra charging) on fundraising site Kickstarter in two model variants: the iEV X and iEV X+. The X can cover up to 50 kilometers (31 miles) on a single charge, while the X+ can travel up to 120 kilometers (75 miles) with a single charge. The X is limited to a top speed of 45 kilometers per hour (28 mph) while the X+ can travel at speeds up to 60 kilometers per hour (37 mph). The Kickstarter campaign has been active for seven days, and has raised $13,423 thus far, with a pledged goal of $186,070.