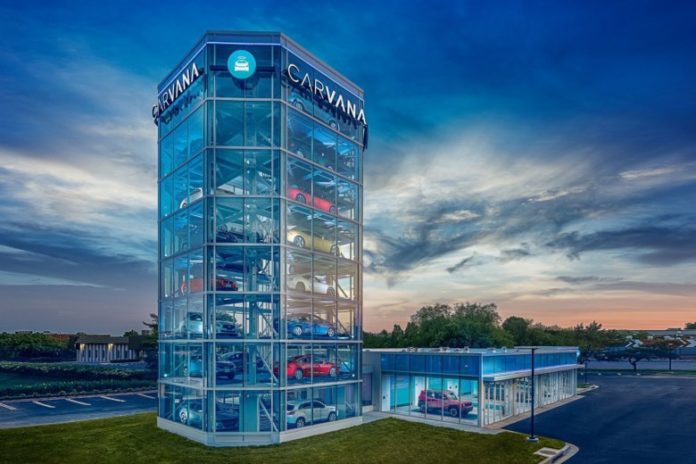 Quick…list the things you’ve bought from a vending machine. Soda, snacks and coffee spring to mind. Personal care products, perhaps. Even paperbacks in an airport. If you’re older than a certain age, you might remember cigarette vending machines. How about cars?

That would be a new one for most people, but residents of Gaithersburg, Maryland now have the option to use a genuine coin-op “vending machine” to pick up their newly purchased cars. The new eight-story glass structure, which is operated by online used car selling site Carvana, is situated alongside I-270 in Maryland and can hold up to 30 cars awaiting pickup by their owners. It’s actually the 10th car “vending machine” Carvana has opened, and joins facilities in Houston, Dallas, San Antonio and Austin, Texas; Nashville, Tennessee; Raleigh and Charlotte, North Carolina; and Jacksonville and Tampa, Florida. The first structure was unveiled back in 2015.

The process (which you can watch here) goes like this: car shoppers use Carvana’s website to shop for and purchase a car, insure and register it and then schedule a delivery. Buyers then receive a commemorative, oversized Carvana coin they can use as early as the next day to retrieve their car from the fully automated “vending machine” tower, which works in a similar manner to automated parking structures in New York and other cities. Since the tower is glass, however, it makes for an interesting and somewhat bizarre site to watch.

“Growing our presence on the East Coast is a great way to kick off the summer,” Carvana CEO Ernest Garcia III said in a news release. “We’re looking forward to bringing the fun car-buying experience we’re known for to even more people in the area.”

Is it working? The results are mixed. Carvana, which was founded in 2012, saw a 127 percent jump in revenue to $360.4 million while posting a net loss of $52.7 million for the quarter ending March 31 (due to expansions, according to the company) This compares to a net loss of $38.4 million on revenue of $159 million for the same quarter a year ago. The company claims to have over 11,000 vehicles in its inventory nationwide.

If using the auto vending machine isn’t to a customer’s taste, Carvana says it will also deliver vehicles to buyers’ driveways. For users who live out of town, the company pays up to $200 for a one-way flight to a Carvana facility so the buyer can pick their vehicle up and take it home. All vehicles have a seven-day return policy and have passed 150-point inspection, according to Carvana.