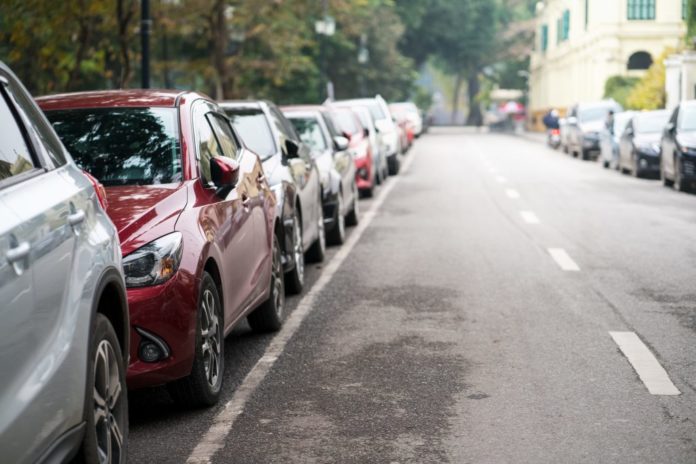 The citizens of Bay Ridge, Brooklyn are apparently tired of auto dealerships parking their inventory on the sidewalks of Fourth Avenue between 88th and 95th streets. So much so that a local politician has decided to do something about it.

New York City Councilmember Justin Lee Brannan knows that New York City traffic rules already prohibit parking or stopping cars in crosswalks and on sidewalks and that there’s a theoretical $115 fine for it on the books. He and his supporters note that the rule is unevenly enforced by traffic enforcement and that local cops aren’t writing tickets for the car dealerships, which means pedestrians need to find a way around the dealerships’ inventories. Additionally, the dealerships are taking up local parking and residents are finding it hard to park in an already parking-challenged neighborhood.

“People complain and rightfully so: it’s not right, it’s hard to navigate for seniors, for people pushing baby strollers, and not only that, you’re not supposed to park on the sidewalk,” he told the Brooklyn Daily. “If I parked on the sidewalk I would get a ticket.”

Brannan, a Democrat, has co-sponsored a bill, Int 0708-2018 or “Preventing Businesses Licensed by the Department of Consumer Affairs (DCA) from Unlawfully Parking on a Sidewalk or Crosswalk” that would give the DCA discretion to suspend or revoke dealerships’ licenses to operate in New York City if they repeatedly violate the laws already on the books that prohibit parking on sidewalks and crosswalks. The bill was introduced to the Committee on Consumer Affairs and Business Licensing.

This is not the first time Councilmember Brannan has introduced the legislation. A first attempt was made in 2016, but that bill never made it to voting. The new bill is being cosponsored by Councilmembers Jimmy Van Bramer and Rafael Espinal. It’s also not the first time tempers have flared over auto dealers parking on sidewalks in New York City. Neighborhood advocacy group Make Queens Safer has complained for years that car dealerships illegally park on busy Northern Boulevard and contribute to traffic problems and hazards to pedestrians.

Councilmember Brannan, who began his term in January of this year, is emerging as a possible candidate to be the next Speaker of the New York City Council, according to the Gotham Gazette. He represents District 43 in Brooklyn, which includes Bay Ridge, Dyker Heights, Bensonhurst and Bath Beach.